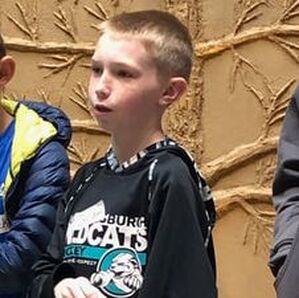 ​Once upon a time in far away castle, there lived a duck. His name was Bob. He loved to quack, but one day an army came in. It was a time of war! Duck (bob) ran to the forest hoping that someone would save him. But no one came! He was left to die in that forest. The end of Bob, but was the start of Joe the cow, and that will be the last war of the world. 5000 years later, the cow was ready to fight the french army. It was 12:00 when he went to the castle, but it was a mystery what happened in that very odd and old castle. Did joe die or did he survive?

10,000 years later bob was having dreams of a creature with 32 claws eight eyes and two horns. Then he came back to life. He was alive! Not as a duck, but as a human, like in his dream! He went to the war. But still, Bob died. He came back to life as a human again, but he died twenty times and came back to life twenty one times. He was weak as a human and didn't know english. He set a wooden house in the forest. He made a fire and went to sleep. He had that dream again, but in the dream, the human was strong. When he woke up, he was strong. He went to war. He killed one person, but he got shot in the neck. He died over and over. Finally, the war stopped. In fact, time stopped. Someone stopped time! It was billy the superhero! he put all of them in their homes then snapped and time was unpaused. War was over forever. After 10,000 years, they found the castle. Joe was dead inside, but when Billy and Bob touched him, they combined. He could do anything! Bob didn't know what to call himself. Maybe Billy Bob Joe?

He knew English so it was easy to talk. He knew he was strong, so all day he stopped criminals. But, over and over he had dreams of him and that thing. Every time he had the dreams, he got stronger. He got so strong his daily exercise was thirty busses. He was crazy. He was ready to fight the french army. He went but they got stronger too by training. So he got killed. They were now unstoppable! Although they were weaker than him, there were five thousand of them, and they were crazy. So, he went to sleep. He had a dream of him having his own castle with soldiers everywhere. he had powers like lasers and portals. He was the king of america. When he woke up he thought his eyes fell out. He was King! They all called him king Bob. He had no clue what was going on, but just think about it! A duck to a human and a human to a king! He had a whole mansion to himself. He had work to do, so he wrote a book: To be king. However, he didn’t know how to write so he just put, “quack quack quack.” People were confused. King Bob said he wanted it published because he was king.

​The book got published and people got mad quick, including the French army. Bob didn’t know what to do. He said it was a joke. Ok, let’s pause a second and find out who I am. I am Jack. My father is king Bob. He laid me. Now I am a human, not a duck. They almost ate me when I was a duck. I came from a golden egg.

People came to the door It was a giant herd of fans!! Well...at least we thought they were. They had books in their hands with papers saying “Joke, or Choke?”. When they looked closely at the books, they were his! SO he just said, “Leave!”. They left then Bob rushed to his room to learn how to write English. THen he went to sleep. He didn’t know why though. It was that evil thing. He woke up and that creature came. He killed everything including king Bob. Forever! And he took the throne!