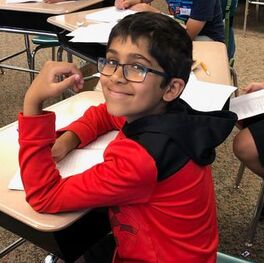 Once upon a time, a boy was born glowing.  As the boy got older, he found out he had a superpower.  Then, three other children also found out that they had powers.  They decided to call these powers “quirks.”  Suddenly more people got quirks!  Now, 80% of the population on the planet have quirks.  The remaining 20% are people who don’t have quirks.  They are “quirkless.”  Some people used their quirks for good, while others used theirs in a bad way.  Those people are classified as “villans.”  One day, a bunch of villans attacked!  Every good guy with a quirk couldn’t stop them. Suddenly a strong man arrived.  “Ha-ha-ha!  Don’t worry!  Why?  Because I am here!” he said while holding seven people and smiling a bright smile.  Then he ran towards the bad guys saying, “Texas Smash!”  and he punched them all with one fist!  Then the bad guys disappeared.

A few years later a boy named Izuku Midoriya was born.  As a toddler, everyday, he watched the video of when All Might, the strongest hero in the world, arrived and saved everyone.  “Ha-ha-ha~!  Do not worry because I am here!” Izuku would always say.  To figure out if you have a quirk you must go to a doctor and get an x-ray on your left foot.  If your left pinky-toe does not have a joint, that means you have a quirk.  One day, Mrs. Midoriya brought Izuku to the doctor to get the x-ray.  Sadly, he had a joint in his left pinky-toe.  That meant he was quirkless.  Izuku cried all day.  When he was younger, he wanted a quirk, just like All Might.  But he didn’t get what he wanted.  This was a big deal to him because he had been a huge fan of All Might since he was born.  Izuku realized that he couldn’t change this, so he just had to let go of his hopes and dreams.  As Izuku got older, he made a “friend.”  His name was Katsuki Bakugo.   Izuku would be nice to Katsuki, but Katsuki would be very rude to him.  Izuku called him Kacchan. Kacchan was Izuku’s childhood bully.  Only for one reason.  Because Izuku was quirkless.  Kacchan’s quirk was explosions.  He could cause explosions to happen from his hands.